This is the official Internet domain of the one-man developer Lameguy64 of Meido-Tek Productions, probably most known for his works in the PlayStation scene. Here, you can find and read about various things and potentially useful resources I've made over the years, as well as reading about updates from me in the News Blog as I can't be bothered to participate in mainstream Social Crapdia, as fun as it may sound to others (trust me, I'm not exactly nice around people, or that's what I think).

Feel free to browse around or abuse my site to your heart's content. Originally, my website used to be hosted on a piddy Raspberry Pi Model B hooked up to my home router, but thanks to shitty changes with my ISP preventing me from receiving incoming connections (forced NAT I'm told), I could no longer host my website that way. Fortunately, Raion of the IRIX Network kindly offered to host my site with no strings attached and has been hosted there since December 3, 2019.

If you're not a sort who's cowardly of the idea of connecting an old computer to the Internet, you can actually browse this website on really old browsers without issue! Expect to see some formatting issues on things I've not yet adapted for older browsers but I've done my best to make things at least presentable on them, which is much to be be said about many "retro" websites where they don't even load at all due to stupid mandatory https... Retro my ass.

Welp, looks like I won't be streaming for awhile

As my last two attempts at livestreaming have failed due to bad Internet bandwidth, the last one of which I wasn't able to begin as the upload rate was too piss poor to stream with, like I was getting sub 1mbit/s upload rate which is reflected on YouTube's streaming interface. I won't be doing any livestreams for awhile as chances are it'll just get botched by poor upload rates the next time I try again and I don't think it'll improve anytime soon, given ISPs around here don't really change anything about their service when the demand for Internet starts to surpass the capacity of their infrastructure.

I really should get going with that old computers video I've been meaning to make in the meantime, but I've been rather busy with programming related projects at this time of year it seems, as I tend to prioritize such projects over everything else especially the FartMaker music system and a brand new iteration of my PSn00bDEBUG that'll interface with GDB. I also need to do a few improvements on my website, namely a better hardware collections page that'll work with a database so I can easily add and update entries without having to log into the admin prompt just to edit the collection page manually, the main reason why I haven't really kept it up to date.

As for that home-grown message board thing I was gonna implement on my website, I may end up not bothering with it as I just remembered a rule I placed upon myself that I'm not supposed to be running my own community half-way through the creation of the message board system and decided against finishing it. Not only that but the amount of ass-backwards filtering (ie. convert obfuscated/hidden swear words to proper swear words) I want to implement reaches a point where I have to start using deep learning or AI crap which are beyond my level to make it work reliably. I also think it may bring more trouble than good as it has 'annoying' things like archiving post edits that are always visible to all users and automatic image archiving to make sure a linked image remains online for as long as the message board stays up.

I've also heard recently that Google Chrome and I imagine other browsers would follow suit where the browser would refuse to download from non https sites, and undoubtedly at some point in the near future outright refuse to load non https websites. My answer to this is I won't cave in and add https on my website, instead, I'm going to start putting things such as binary builds of my major projects exclusively on my website in retaliation. It also helps that I like the idea of making my stuff harder to access for newcomers, as quite frankly, I don't think my stuff is worth anyone's time.

With the message board thing scrapped, I'm tempted to just create another Discord server, but make it such that there's only one empty text channel that nobody can post on just to troll people with.
#23

Well, that camera setback I mentioned in my last post? Well that's been sorted out fortunately, just two weeks ago actually. Didn't have to dismantle the TRV820 too much to get to the mode select dial and dowse it with alcohol to clean the contacts inside it.The dial itself was a fused together piece of plastic that is not easy to take apart non-destructively, but there was a small opening big enough to feed alcohol into... A bit crude but it did the job. As for the video project itself I've been working mostly with the script and narration and filmed most of the clips I need, though I'll have to film a couple more clips and gameplay footage as the script I've written demands, as well as some hardware changes being done to the systems I'm covering mid-production. Should consider doing scripts and narration first before filming and capturing as its the most exhaustive part to do I found.

I can't help but notice how I don't really seem to feel as adept at making videos as I was just a few years ago, either my video projects were just simpler in nature at the time, which is most apparent in my last PSn00bSDK video which I was able to make in just a few weeks and just on time before the year's end, or maybe its the effect from getting older as doing certain things in video making gets quite tiring and I don't always feel like working on a video every day these days. I generally avoid working on such projects when I don't feel like it as the end result would most often be shit and I'd feel shit as well as a result. I guess this is to be expected as you get older and its a good thing I'm not being a stupid YouTube partner as I can take the time to get a video out.

Lately some marginal progress has been done to my Random Magical Girl project, namely the FartMaker music system which I need to get going first as its essentially the heart of the project much like the Touhou games I'm trying to do a western influenced rip-off of more or less. I've gotten note playback with chords to work last month and now I'm in the process of implementing the text interface for managing a whole song, such as multiple tracks and editing instrument patches. The photos below shows what these interfaces look like more or less. 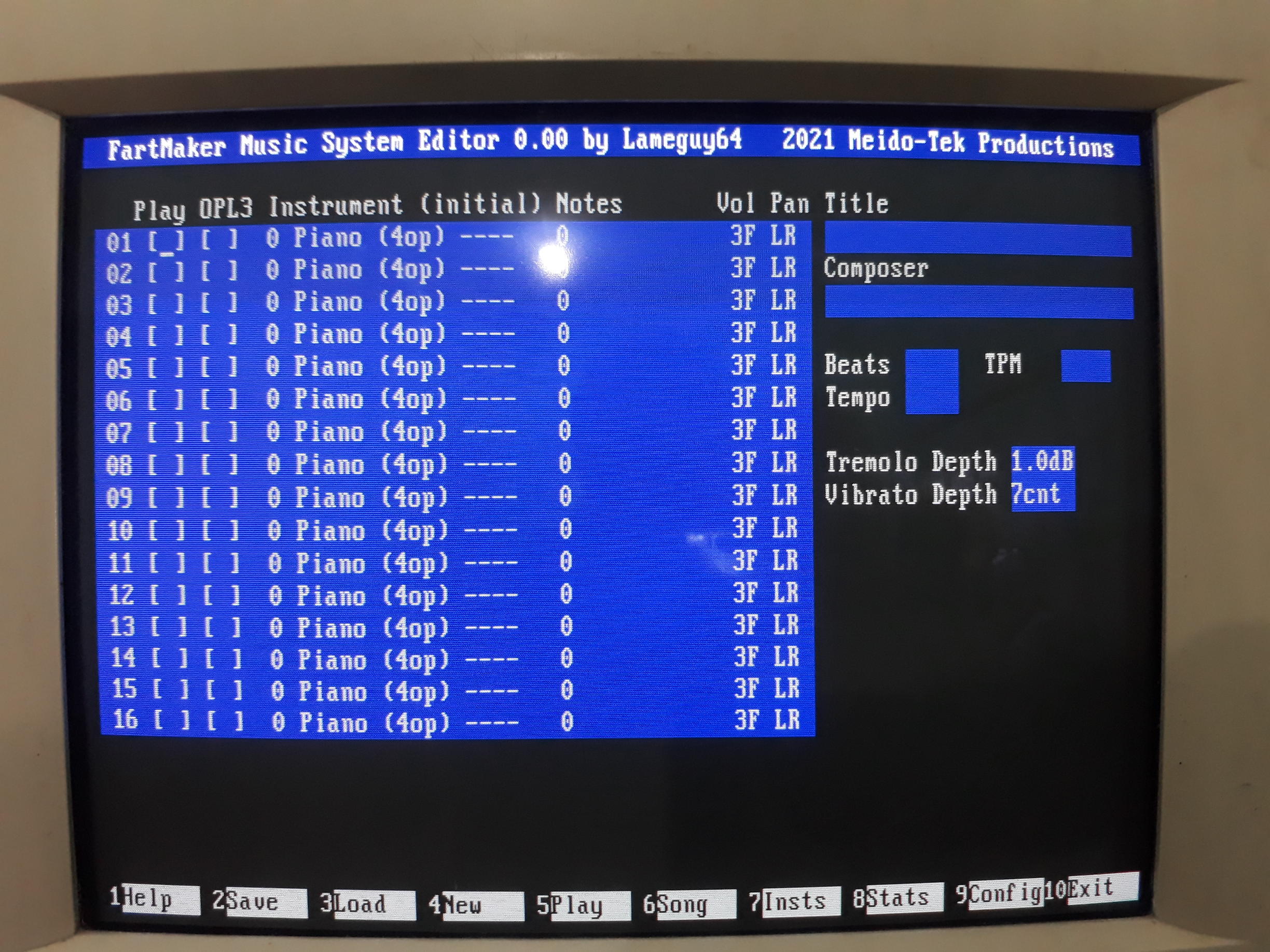 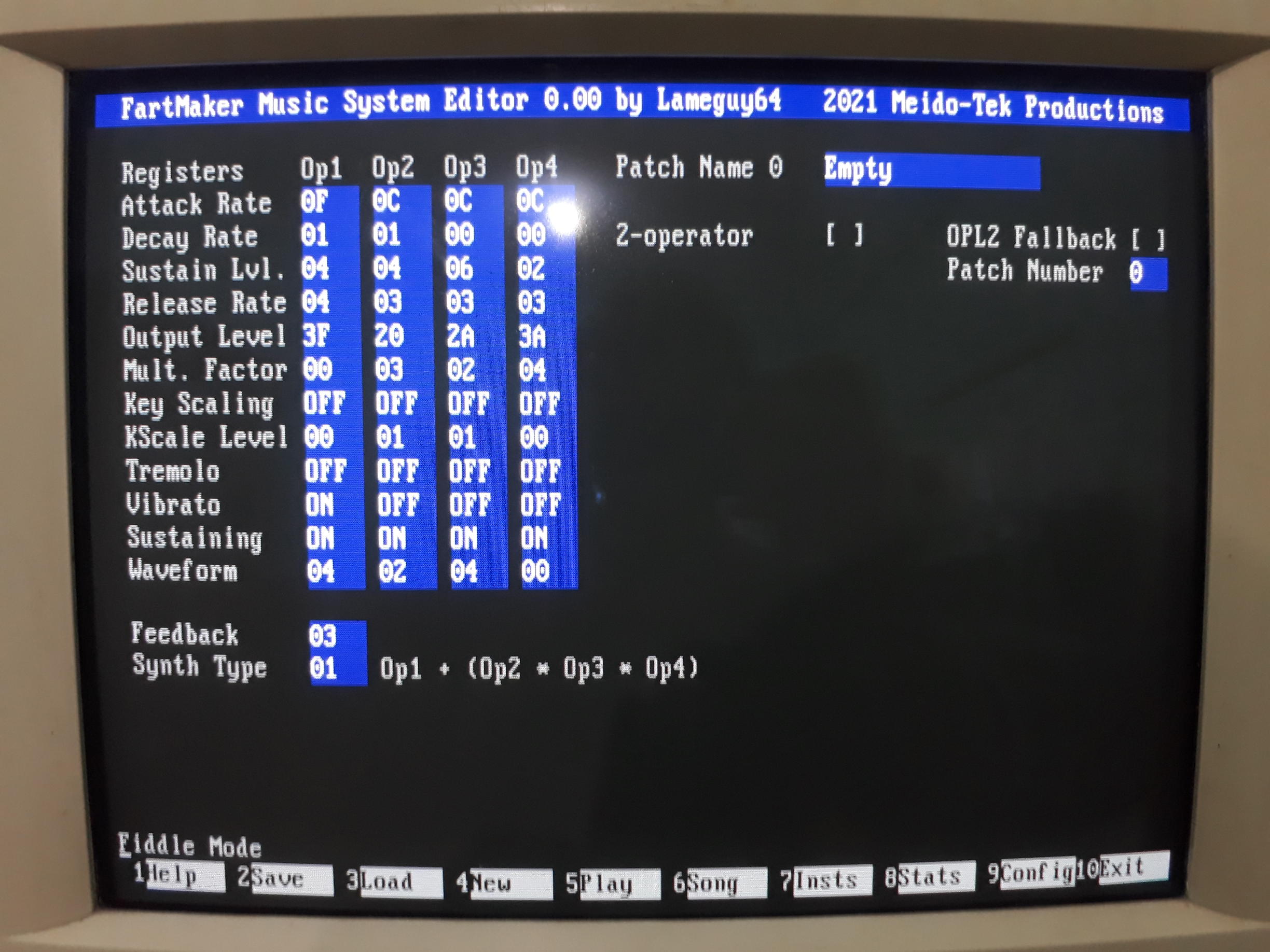 Whilst I seem to be more of a MIDI guy with my CZ-5000 these days I still wanna dick around with 4op OPL3 FM synthesis and this FartMaker system should allow me to do just that, especially as Adlib Tracker II's 4op support is quite awkward to use and I can't really work with trackers anymore.

As for other DOS development related stuff goes I've given DJGPP a shot. And well I can see some potential with it, trouble is I find it to be a bit awkward to use compared to OpenWatcom. For one the gcc compiler wouldn't work under a Windows 95 Dosbox as it complains about no DPMI memory available, and another is there doesn't seem to be much in the way of remote debugging support other than doing it through a painfully slow serial connection. I could work with just having access to the GDB console through serial but that doesn't appear to be supported. I do like how CWSDPMI starts instantly even on a 386DX-40, whereas DOS/4GW would take a few seconds before the program actually starts on a system that slow.

But anyway, I guess that's all I have to say for now... And to be honest I wonder if anyone actually reads these posts...
Home - Lameguy64's Website